Women’s Suffrage and the 1918 Pandemic 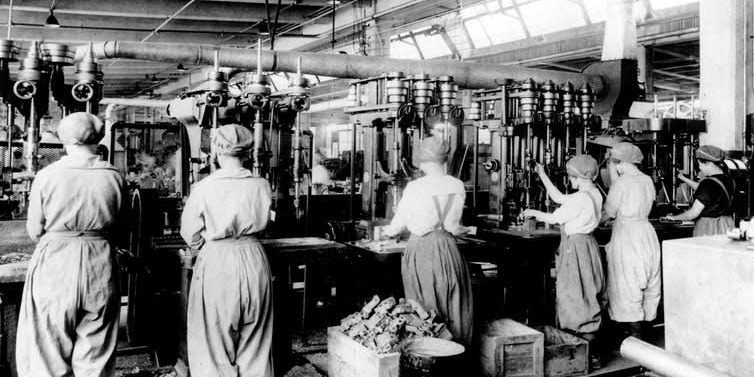 Beginning in the mid-19th century, several generations of women suffrage supporters lectured, wrote, marched, lobbied, and practiced civil disobedience to achieve what many Americans considered a radical change to the Constitution – the right for women to vote.

In 1918, Spanish Influenza swept the globe infecting one-third of the world’s population. Just like today, the severity of the pandemic was enough to temporarily shut down parts of the economy. The virus disproportionately affected young men, which in combination with World War I, created a shortage of labor. This gap enabled women to play a new and indispensable role in the workforce.

The aftermath of this disaster led to unexpected social changes, opening new opportunities for women and in, the process, irreversibly transforming life in the United States.

Women filled what had been typically male workplace roles. In unprecedented numbers women took jobs outside the home. They began to demand equal pay for their work. Gaining greater economic power, women actively advocated for more rights, including the right to vote.

Finally, in 1920, the 19th Amendment to the Constitution was passed by Congress and signed into law by President Woodrow Wilson. The 19th amendment guaranteed all American women the right to vote. Achieving this milestone required a lengthy and difficult struggle. Scholars cite Abigail Adams and her contemporaries, such as Mercy Otis Warren, Judith Sargent Murray, Mary Wollstonecraft, and Catherine MacCaulay (to name but a few) as the true founders of women’s rights movements in the United States. Victories, such as the 19th Amendment took nearly150 years of agitation and protest, pain and suffering. But victory was achieved, indeed!

To learn more about Women’s Suffrage in Florida, please visit our exhibit at The Ximenez-Fatio House Museum. Just like in 1918, our lives will be irreversibly transformed by COVID-19, but we will continue to document, preserve, and exhibit the stories of the people who wove their lives into the fabric of our history.