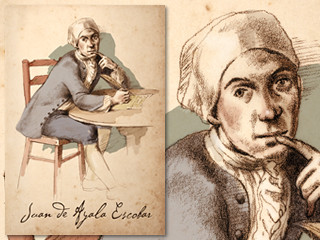 The human spirit is an unwavering thing. By nature, we are curious and optimistic even in the most uncertain times. Grounded in family, community, and shared experience there is a constant that can be found across time and miles. When faced with the worst and the unimaginable is often when we find the best in ourselves. Our ability to band together in the worst of times is perhaps our greatest gift.

In the early 18th century, St. Augustine was often cut off from a friendlier outside world. Decades of destruction in Florida’s interior efforts, continuous English raids, European wars, and pirating created perfect storms. Food, money, and goods were often hard to come by as farming became near impossible (due to the English) and Spain focused its efforts away from their colonies. Were it not for spirited entrepreneurs this would have been the end for our city. Shops often closed and reopened, providing any goods they could find. Trading with the British was illegal, but starving was worse. To save the town some turned to piracy themselves, and while many still struggled our town was able to endure. ​Cristobal Contreras was one of these entrepreneurs whose shops sat on the land the Ximenez-Fatio House Museum occupies today. Another entrepreneur, Juan de Ayala y Escobar​, a Captain and Sergeant Major of the colony, who saved the town in 1712, during one of the worst food shortages, by bringing in five boatloads of edible British contraband. When the governor tried to arrest him, nearly all the citizens of St. Augustine banded together to protest and successfully saved Ayala.

It’s easy to see humanity as individually-driven and selfish. Certainty, we have our moments – ​Juan de Ayala y Escobar sold those goods at an exorbitant price! – ​but ultimately, human beings are communal. In recent history, we find some of the best examples of this in grassroots efforts, such as the “Cajun Navy” and Occupy Sandy relief efforts. When government-led efforts fall short it is often the community as a whole that steps in and fills the gaps. Not for personal glory or profit but out of generosity for their fellow man. Especially now, when things seem uncertain on a scale we never imagined, it’s important to remember that the human spirit has prevailed during the worst of times. Whether it was over three hundred years ago with bootleg British food or right now while private citizens make much needed facemasks, we have always found a way to lift one another up. And like all disasters we have faced throughout history, this too shall pass, and the human race will have learned what we’re made of!

1914 is a year when we as a race might have been at our worst. Five months into what we will eventually call WWI and already the Western Front had solidified. There had not been a large scale war in Europe in almost a hundred years. Men who had grown up being taught the glories and honor that came with warfare found themselves at the edge of humanity. Gone were the white gloves and in their places were constant shelling in freezing terrain where even lighting a fire would get you killed. WWI would push the boundaries of what the human spirit could endure. In the midst of all this came Christmas eve. The German and British lines were close enough that the sound of Germans singing Christmas carols could be heard in the British trenches. Surrounded by the mayhem that was the Western front the human spirit momentarily prevailed as British soldiers joined in. When dawn broke two German Soldiers approached

enemy lines unarmed. Just a morning before this would have cost them their lives but today, Christmas, it was the catalyst for a completely human moment. British and German soldiers met in the middle. They sang songs, exchanged gifts of chocolate and cigarettes, played a game of football, and buried their dead.

The Essential Service of Storytelling
April 15, 2020