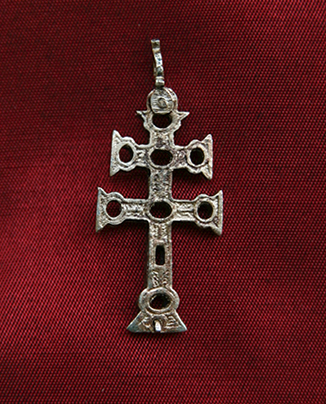 March 31, 2020  Human history is rife with plagues and pandemics. Just say the word “plague” and most people will conjure images of the Bubonic Plague (1347-1351) and Monty Python characters calling “Bring outcha dead!” That was a hilarious scene until you are reminded that over 200 million people lost their lives to this disease. Most recently, the Spanish Flu (1918-1919), with a death toll somewhere between 40-50 million people brought the world to its knees. COVID-19 is the new, unimaginable micro-biotic enemy in our midst. The Ximenez-Fatio House has a unique history with pandemics and infectious disease outbreaks. In our own backyard, an archaeological dig in 2002 unearthed a Caravaca Cross made of white bronze. One of only two such amulets found in North America; the cross was sanctioned by the Spanish Catholic Church to celebrate the end of the plague of the 1660s that ravaged Europe. When this plague is over – and it will be! – let us celebrate by holding high the historic Caravaca Cross in our possession as a reminder that we are all part of history. It’s what we do with our knowledge that will determine if we ever need such a cross again.